State is the first to be awarded No. 1 ranking five times 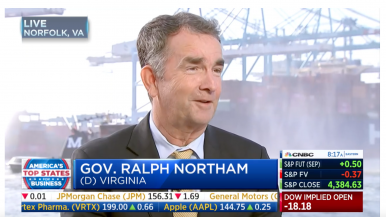 Virginia retained its place as CNBC’s Top State for Business this year, beating out North Carolina and Texas and becoming the first state to achieve the honor twice in a row and five times in all, the cable business news channel announced Tuesday morning.

Virginia Gov. Ralph Northam appeared live Tuesday morning on CNBC’s “Squawk Box” sitting in front of the Norfolk harbor, where ships blasted their horns and sprayed water in celebration following the announcement that Virginia had again ranked No. 1 in CNBC’s America’s Top States for Business competition. Virginia also took the top spot in CNBC’s annual state rankings in 2019, 2011, 2009 and 2007. CNBC did not rank the states in 2020 due to the COVID-19 pandemic.

“When you do the right thing for people, it’s not only the right thing, but it’s good for business,” Northam said, alluding to the measures the state has taken toward supporting diversity, equity and inclusion efforts over the last two years. In July 2019, when Virginia last topped CNBC’s Top States for Business, Northam was still in hot water over the revelation of a blackface photo on his pages from his medical school yearbook. He has focused the remainder of his term on increasing diversity, equity and inclusion — legalizing marijuana, increasing the state’s minimum wage, abolishing the death penalty and overhauling the state’s procurement process to make sure woman- and minority-owned businesses receive equal opportunities to bid and win state contracts.

Two years ago, Virginia’s 2019 win was a bright point, coming after the state had fallen to 13th place in 2016. Northern Virginia economic development officials and Gov. Ralph Northam were taking a victory lap after landing Amazon.com Inc.’s East Coast HQ2 in Arlington in late 2018, a $2.5 billion project that is expected to bring 25,000 jobs. This time, the reasons behind the ranking are more nuanced. CNBC weighted its decisions toward the cost of doing business, also taking inclusiveness and public health measures into consideration, acknowledging the COVID-19 pandemic and 2020’s nationwide racial justice-focused protests.

Virginia also is emerging from the pandemic, with more than 70% of its residents having been at least partially vaccinated against COVID. Northam discussed recovery efforts with CNBC and also mentioned his “Get Skilled, Get a Job, Give Back” program, one of his signature initiatives. Known as G3, the program provides tuition funding for eligible low- and middle-income students who are pursuing degrees in high-demand fields, including health care, technology and manufacturing.

In an interview with CNBC about this year’s win, Virginia Port Authority CEO and Executive Director Stephen Edwards said, “We’ve seen a remarkable V-shaped recovery from COVID. May 2021 was an all-time record for the port, 56% bigger than we were last year, and significantly above 2019.”

“Today’s ranking reaffirms what we already knew — Virginia is the best state for business,” Virginia Chamber of Commerce President and CEO Barry DuVal said in a statement. “The ranking reflects our longstanding investments in workforce training and our robust education system, while also recognizing the increasingly inclusive nature of the commonwealth. This ranking validates our approach to maintain Virginia’s standing as the top state for business through long-term planning efforts and targeted policy recommendations as part of Blueprint Virginia.”

Virginia outranked North Carolina, which came in second place, marking that state’s best finish since CNBC began the comparative study of the states in 2007. Maryland ranks at 12th, the most-improved state, moving up from its 2019 ranking of No. 31.

“Virginia continues to be the best place to do business because of our world-class education institutions, talented workforce, and shared commitment to equity, diversity, and inclusion,” Northam said in a statement Tuesday. “I am proud of what this coveted recognition says about the policies we have put in place and how they are driving growth and innovation across our commonwealth. Our success is a blueprint for creating a vibrant economic climate in the post-pandemic world — and proves that when you lift everyone up, when you treat people right, and when you celebrate diversity, it’s also good for business.”

CNBC based this year’s rankings on 85 metrics — up from 64 metrics in 2019 — across 10 categories, including workforce, education, life, health and inclusion, access to capital, cost of doing business and cost of living. This year, cost of doing business was the most heavily weighted category, which had previously been taken by workforce. The top category is determined by states’ economic development marketing.

Virginia topped the education category, based on multiple measures of K-12 education including test scores, class size and spending, as well as the number of higher education institutions in each state. Virginia also did well in workforce, coming in third. The workforce category considers factors such as the availability of workers, the concentration of science, technology, engineering and math (STEM) workers, union membership and right to work laws and the diversity of each state’s workforce.

The commonwealth ranked 11th in the life, health and inclusion category, which CNBC previously called quality of life. The change reflects the addition of inclusiveness and public health measures, such as voting rights and COVID-19 vaccination rates.

Northam told CNBC, “We’ve had a number of elections here in Virginia. They’ve been safe. We’ve had accurate results. … We want to make it less cumbersome to vote.”

Northam also addressed the public health metrics. “Initially, it was tough to get PPE and then testing supplies. We’ve had a very successful vaccine rollout in Virginia. Over 73% of Virginians have now had their first shot or two,” he said.

2. North Carolina was helped by Apple locating its first East Coast campus outside Raleigh, but hurt by the lack of statewide public accommodation law to protect nondisabled residents against discrimination, CNBC wrote.

3. Utah ranked high for its overall economy but didn’t perform as well in the categories of life, health and inclusion; education; and cost of living.

4. Texas was hurt by policies that counted against inclusiveness metrics and an underfunded public health system, plus the highest rate of uninsured and a low COVID-19 vaccination rate, as well as electric grid stability issues, as evidenced by the state’s February 2021 power crisis that saw 4.5 million homes left without power amid severe winter storms. Until this year, Texas was tied with Virginia as the overall winner of America’s Top States for Business, with four previous wins.

5. Tennessee appeared in the top five for the first time, thanks to its second-best economy and eighth-lowest cost of doing business, the most heavily weighted category, according to CNBC.