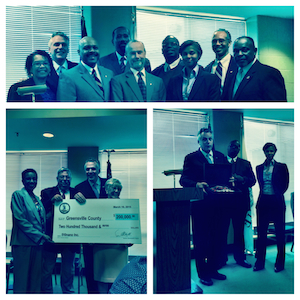 GREENSVILLE COUNTY, VA - Governor Terry McAuliffe announced today (March 16, 2015) that 510nano Incorporated, a developer of renewable energy projects and technologies, will invest $11 million to relocate its headquarters and establish a manufacturing operation in Greensville County. The company will construct a 100,000-square-foot manufacturing facility for the production of solar panels in Greensville County Industrial Park. The project will create 113 new jobs.

Speaking about today’s announcement, Governor McAuliffe said, “Creating these 21st century jobs in the advanced manufacturing and renewable energy sectors is critical as we work to build a new Virginia economy. 510nano’s investment in Greensville County is a huge win for the Commonwealth and especially for a community that is transforming itself.”

“Greensville County is a great fit for 510nano’s headquarters and new manufacturing operation, offering a site that meets the company’s needs, a superior workforce, a manufacturing industry cluster and close proximity to a world class port,” said Secretary of Commerce and Trade Maurice Jones. “We are confident that 510nano will continue to profitably pursue its strategic vision from its new Virginia location.”

510nano Incorporated is a cleantech innovator specializing in the development and operation of commercial- and utility-scale renewable energy power plants (REPPs), along with the design of associated modules, panels and other hardware. Since its founding in 2005, 510nano has developed more than 30 clean technologies in various stages of commercialization. In 2008, the company began generating steady development, consulting, and management fees as a turnkey power plant developer. In 2012, 510nano began deploying its own capital, starting with two rooftop systems on a long-term revenue contract with the Town of Los Gatos, California, and culminating in 2014 with the delivery of 510 REPP One LLC, a commercial-scale plant in Garysburg, North Carolina. The company has deployed third-party off-the-shelf technology at three solar farms producing over 2.2 million kilowatt-hours (kWh) of power in an average year.

“Solar VIA is a technology that we’ve designed to lower the cost of solar generation to less than 6 cents per kilowatt-hour without subsidy,” said Dr. Reginald Parker, President & CEO of 510nano Inc. “The manufacturing home for the technology needs to be strategic and meaningful. With great access to I-95, Hampton Roads and rail, we see Greensville County, Virginia as an ideal home for the manufacturing site for Solar VIA, the headquarters for our solar energy business, and our energy research and technology center. Additionally, we felt that Greensville offered an attractive labor force, strategic nearby partners, and a great name for a green innovation company. This big step is more than a great opportunity. It is a renewable energy achievement for Virginia and the nation at large.”

The Virginia Economic Development Partnership worked with Greensville County and Virginia’s Growth Alliance to secure the project for Virginia. Governor McAuliffe approved a $200,000 grant from the Governor’s Opportunity Fund to assist Greensville with the project. The Virginia Tobacco Indemnification and Community Revitalization Commission approved $635,000 in Tobacco Region Opportunity Funds for the project. The company may also be eligible to receive state benefits from the Virginia Enterprise Zone Program, administered by the Virginia Department of Housing and Community Development. Additional funding and services to support the company’s employee training activities will be provided through the Virginia Jobs Investment Program.

"The Greensville County Board of Supervisors is thrilled 510nano Incorporated has chosen to locate in our community," stated Peggy Wiley, Chairman of the Greensville County Board of Supervisors. "During the past several years when the economy was not at its best, the County put an emphasis on investing in our economic development resources, such as the development of land and utilities and educational opportunities for our workforce. These assets are vital to bringing new companies like 510nano to the area. The County also participates in marketing on a regional level through a membership in the Virginia Growth Alliance. 510nano is the second announcement Greensville County has made in 2015, and we look forward to more in the near future."

“I am pleased that 510nano chose to invest in Greenville County,” said Delegate Terry Kilgore, Chairman of the Virginia Tobacco Indemnification and Community Revitalization Commission. “These are the R&D jobs that the Tobacco Commission looks for, which it turn helps to diversify our economy.”
“Economic development remains a top priority in the Commonwealth, and I am thrilled that 510nano Incorporated will bring new jobs and investment to Greensville County,” said Senator L. Louise Lucas.

“Jobs and economic development remain a priority for my 75th District and the Commonwealth of Virginia,” said Delegate Roslyn Tyler. “I am pleased that 510nano Incorporated has selected Greensville County as their headquarters and will create 113 new jobs that are needed in Southside Virginia, and it will also be an excellent economic boost to our county.”

Since the beginning of the McAuliffe administration, 335 economic development deals have been closed in Virginia with more than $6.19 billion in capital investment, more than twice the amount of capital investment brought to the Commonwealth in any Governor's first 14 months in office.