LaTreasa Early has always had a gift for teaching. Although she currently works for the federal government helping adults earn their GED or high school diploma, her true love has always been early childhood education. “It has always been a passion of mine” says LaTreasa who holds two Master’s degrees, one in Education from Trinity University and one in Educational Leadership from George Mason University.

Now that passion is bringing her home.

Born and raised in Keysville, Virginia, Latreasa is working to open a preschool based in Charlotte County for the area’s youngest learners, from 6 months to four years old.

“I always wanted to start a preschool. Even when I started college I was interested in early childhood education.” 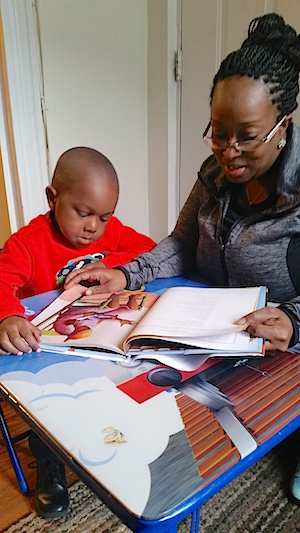 Her heart for early learning is not the only factor fueling LaTreasa’s push to bring a new preschool  to the area. She became aware of the need as she searched for pre-kindergarten options for her own child in the Washington D.C. area where she currently lives. The disparity between the options available there versus what is available in Charlotte is glaring. Now she hopes to bring the holistic approach to early childhood education to her own home town with a program that will include foreign language, the arts, music and technology. Cue

Latreasa attended the 12 week course last year and she says the benefits she reaped were numerous. Best of all? “It provided a source of networking,” says LaTreasa.  She was able to meet and talk to people actively involved in the government and court systems, people integral to her success as a new business in the area.

And the networking was not limited to people within Charlotte. It extended to other business owners who were offering services Latreasa needed. For example, through the bootcamp she was able to connect with someone who is helping her implement and design a web page.

The class also gave her a chance to present her pitch to potential investors, pushing her to further develop  her business model.

Despite the fact that progress has hit a few bumps in the road, mainly centering around the location of the facility, LaTreasa hopes to launch her new dream in August.

The UpStart Entrepreneur Bootcamp gave this gifted educator a classroom of experience and the tools that she needed to get her business idea out of recess and into session.

Another UpStart course is scheduled to be offered mid-May. For more information, visit http://vgagroundswell.com/grow

“Building the Foundation for Your New Business” - Small Business Seminar