Trout River Dry Kiln to Invest $5.5 Million, Purchase More Than $30 Million in Lumber from Virginia Sawmills Over Next Three Years

RICHMOND - Governor Terry McAuliffe announced today in the Town of Crewe that Trout River Dry Kiln, LLC will open a major hardwood kiln operation in Crewe, located in Nottoway County.  The company, which will dry lumber to be made into hardwood flooring, will invest more than $5.5 million to build nine new kilns and create 40 new jobs, making it the biggest industrial job creator for Nottoway County in recent years.  The Commonwealth of Virginia is partnering with Nottoway County, the Town of Crewe, and Trout River Dry Kiln on this project through the Governor’s Agriculture and Forestry Industries Development Fund (AFID).

Speaking in Crewe about today’s announcement, Governor McAuliffe said, “Virginia’s wood products industry supports good jobs in our rural communities, provides important market opportunities for the Commonwealth’s private forestland owners, and is a major driver of export sales and shipping containers through the Port of Virginia.  Partnering with a company like Trout River Dry Kiln furthers the recovery of Virginia’s forestry industries, which were hit hard by the economic recession, and the important income and jobs they provide.  Trout River’s expansion and relationship with Lumber Liquidators means that Virginia wood will be found in homes and businesses throughout this country.”

In addition to the investment and jobs created in Nottoway County, Trout River Dry Kiln will spend more than $30 million to purchase from Virginia sawmills approximately 34 million board feet of lumber – or 85 percent – of the 40 million board feet the company will need over the next three years, providing new opportunities for Virginia’s logging and sawmill industries.  Trout River Dry Kiln will trim, dry, and grade the lumber before sending it to its sister company, Trout River Lumber, to be made into hardwood flooring.

The Virginia Tobacco Commission has awarded a fourth grant to the Mid-Atlantic Advanced Manufacturing Center (MAMaC) in excess of $4.4 million. The award, serving as a match to $3.3 million grant award from the Virginia Department of Transportation, completes funding for the expansion of Otterdam Road to serve the site from I-95. Greensville County, Mecklenburg County and the City of Emporia are partners in the Regional Industrial Facilities Authority created to support the site’s growth. The localities submitted a joint application to the Tobacco Commission for this funding opportunity.

Senator and Tobacco Commission Vice-Chair Frank Ruff stated,”The Tobacco Commission is very supportive of the regional effort that is being made in Greensville County toward the development of a first class mega site that will have the assets needed to attract a major employer.  In the last several years, Virginia had missed opportunities to recruit major companies because we were not ready with a site large enough to fulfill their needs. All of us believe MAMac will allow Virginia to compete."

Otterdam Road, a two lane rural route, will serve as the gateway to MAMaC. Engineering for the road upgrades from Interstate 95 exit 13 to the northern portion of MAMaC is 90% complete. The Virginia Department of Transportation awarded a $508,000 grant to fund the engineering. This award was made through the Economic Development Access program. Construction will begin by summer 2014.

“We are excited about this investment, as it supports Patriot Rail's long-term strategy to expand the mechanical repair services within the rail industry," John Fenton, the company’s president and CEO, said in a statement. "Our operational strategy for Blue Ridge is designed to provide fleet owners with a network that delivers consistent, high-quality and responsive maintenance services that will reduce overall fleet downtime." 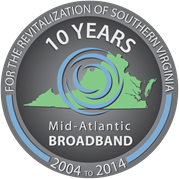 Mid-Atlantic Broadband Communities Corporation (MBC), a successful wholesale fiber-optic open-access network transport provider, is celebrating their 10 year anniversary today.  Many things have changed over the last ten years, but MBC has remained steadfast in working to fulfill its core mission areas of promoting economic development, lessening the burdens of government, bridging the digital divide, and reinvesting in our communities.

The initial investment in 2004 from the U.S. Department of Commerce and the Virginia Tobacco Indemnification and Community Revitalization Commission funded the build out of the first 800 miles of fiber throughout Southern Virginia, connecting every single industrial, business and technology park in the region.  MBC recently completed three Federal grants through the American Recovery and Reinvestment Act of 2009 which included the construction of over 700 additional miles of fiber to the original network.  Those projects included extending open-access fiber to all K-12 schools in Southern Virginia, extending the fiber backbone west to Virginia Tech in Blacksburg and extending network builds to southeast Virginia/Hampton Roads market in partnership with Old Dominion University.  Today, MBC maintains a regional fiber network of 1600+ route miles with over 300 buildings and 70 towers on-net, including direct connectivity to the largest Internet peering hubs in the Southeast and Mid-Atlantic region.

As MBC’s network has grown, so has the MBC team.  Mid-Atlantic Broadband now has fifteen full-time employees dedicated to managing the $100 million organization. Since its inception in 2004, MBC has directly enabled the creation of over 900 full-time jobs and attracted over $1.3 Billion in private sector investments from companies expanding their presence in rural Southern Virginia.  MBC recently opened an office in Silicon Valley, California to promote Southern Virginia and enhance our economic development recruitment efforts for companies looking to expand to cost effective east coast markets. 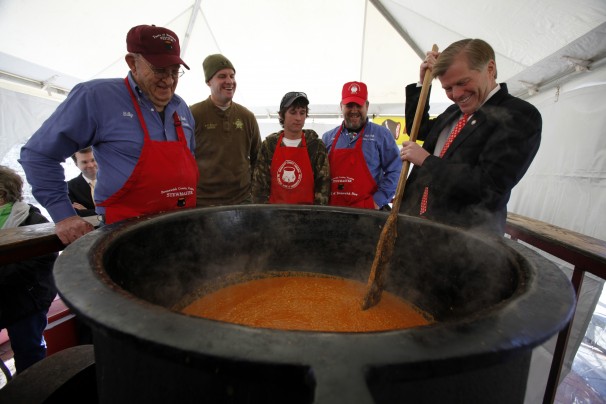 When I arrive around 8:30 a.m. on a brilliant blue winter day in the south-central Virginia town of Alberta (population about 300) to suss out the mysteries of Brunswick stew, I find four guys standing around an 85-gallon cast-iron stew pot, steam rising from its contents of chicken and water, the stew's first stage.

The crew leader, George Daniel, a mustachioed, white-haired 73-year-old auctioneer in a faded zip-up jumpsuit, takes the opportunity to school me in the long, involved process. "Started yesterday," he says.

That would be Billy Waller, 76, retired from the Virginia Department of Transportation. A solidly built man in a red gimme cap, blue button-down and jeans, Waller is using a long-handled paddle to stir 160 pounds of skinless, boneless chicken thighs in 18 gallons of well water, turning the liquid at the bottom of the pot milky. "We cut a few," he says dryly.

Daniel and Waller are sort of the Lennon and McCartney of Virginia Brunswick stew. The two have cooked together for so many years, they've lost count. They agree that I can say "over 20." Their team, the Red Oak Stew Crew, has won first place in the Brunswick stew competition at the annual A Taste of Brunswick festival in October so often that they've lost count of that number, too.

Their victories have earned them repeated trips to the state capital in Richmond to cook the concoction on the fourth Wednesday in January, a.k.a. Brunswick Stew Day. Virginia's General Assembly approved the designation in 2002. It followed a 1988 resolution proclaiming Brunswick County "The Original Home of Brunswick Stew," a rebuke to the town of Brunswick, Ga., whose state legislature has also issued a proclamation claiming the stew was developed there.

Alliance fostering ‘us’ mentality in region 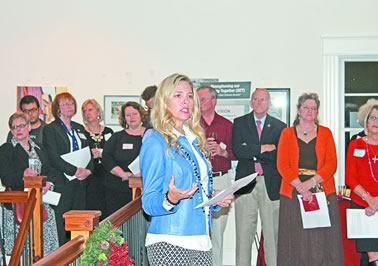 A national program that’s spurred leaders and stakeholders in communities throughout Southside Virginia to band together and create partnerships is bearing fruit.

Virginia’s Growth Alliance, a regional economic development organization that includes six counties (Mecklenburg, Brunswick, Lunenburg, Greensville, Charlotte and Nottoway) and one city (Emporia), held a community event in December at Rosemont Vineyards and Winery to introduce its new executive director and talk about the Stronger Economies Together (SET) strategic plan leaders from across the region have developed.

Woolridge said Reed started on Oct. 1 with 20 years of economic development and marketing experience at localities including Danville and Halifax County.

“I keep saying, I’m learning Southside in 30-mile increments,” said Reed. “From Danville to South Boston, and now I’m actually living in Clarksville and have the entire region from Mecklenburg to Greensville and from the Prince Edward County line to the state line. I’m just thrilled to be here and working with all these wonderful people and all the exciting things that are going on.”

Scott Tate, a Virginia Cooperative Extension agent who facilitated many of the strategic planning workshops for Virginia’s Growth Alliance, said Stronger Economies Together is a national program organized and funded through the U.S. Department of Agriculture.