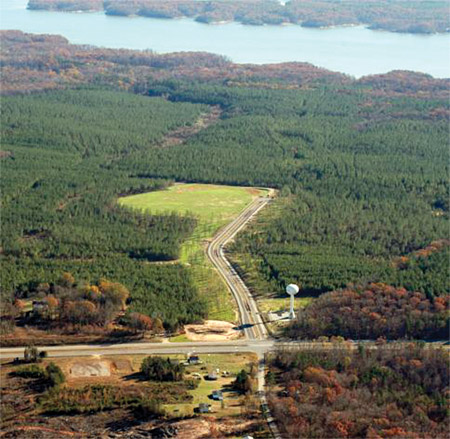 Microsoft Corporation has purchased all or most of the land in three industrial parks located in Mecklenburg County — Hillcrest Industrial Park in South Hill, Roanoke River Regional Business Park located between La Crosse and Brodnax, and Lakeside Commerce Park near Clarksville.

All three land transfers occurred in the past week.

When contacted about the sale, Mecklenburg County Administrator Wayne Carter said he was not at liberty to disclose any information, though he did confirm that the closings had occurred.

Carter also said that Microsoft did not acquire all of the property located in the Roanoke River Regional Business Park. That park is home to American Industrial Heat Transfer, Inc., which manufactures heat exchangers, and it also houses a 50,000 square foot shell building on a 10-acre site near the entrance onto U.S. 58. Both properties were excluded from the sale.

Two buildings located inside the Lakeside Commerce Park near Clarksville — which serve as home to VETS, Inc., a technology services company, and Home Care Delivered, a medical supplies and equipment company — also were not included in the sale.

Clarksville Town Manager Jeff Jones said the Clarksville EDA still owns a 340-acre parcel that abuts Occoneechee State Park and the Lakeside Commerce Park. This land also was not included in the sale.

Detailed questions about the transaction were directed to representatives of Microsoft’s public relations agency. The staff will be away from the office until Jan. 4, according to an auto reply message received by The Sun.

In September, in anticipation of the transfer, South Hill Town Council approved a change to the town’s zoning ordinance to allow data centers to be located in industrial I-G and I-P districts as a matter of right. The ordinance defines “data center” as a “group of networked computer servers typically used by organizations for the remote storage, processing, or distribution of data.”

When asked about the reasoning behind the change at the time, town officials said it nothing more than a routine matter that would allow the property to be marketed to a broader business clientele.

The 138-acre Hillcrest Business Park sits at the interchange of I-85 and Highway 1 on the northern edge of South Hill near VCU Health Community Memorial Hospital.

Promotional materials about the park developed by the Virginia Economic Development Partnership (VEDP) note that the park “can easily accommodate a 1.128 million square foot facility, has a 500,000-gallon water storage tank and a helipad on site, and a fiber node,” a common network box for internet service.

Lakeside Commerce Park is described by VEDP as a 650-acre park that features a campus-like setting that is perfect for technology companies from an existing fiber node. It is accessed from U.S. 58 just east of downtown Clarksville and Occoneechee State Park.

Roanoke River Regional Business Park is located between La Crosse and Brodnax off U.S. 58. The business park was qualified by Dominion Power for data center projects. Its location provides quick access to both Interstate 85 and 95, and the nearby Mecklenburg-Brunswick Regional Airport.

Since 2010 when Microsoft began construction of its data center in Boydton, the company has invested more than $2 billion in the project and built more than 1.1 million square feet of space to house its cloud computing equipment. The Microsoft cloud computing campus represents the largest economic investment in southern Virginia history.Carter thanked Microsoft for its tremendous contribution to the economies of Mecklenburg County and its continued involvement in the area.Microsoft is a publicly held corporation established in 1975 and headquartered in Redmond, Wash., with revenues surpassing $100 billion and more than 134,000 employees worldwide. The computing giant has created nearly 1,800 jobs in Virginia. Approximately 300 of those have been in Mecklenburg County.